Mac spyware, malware and viruses are trending upward - Be aware 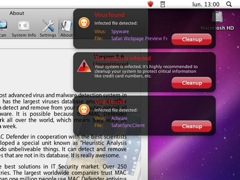 With last week's release of the Mac Defender Trojan Horse program the incidence of Macintosh-based spyware, malware and viruses is trending upward. All Mac users, myself included, should be on the look out for these nasty programs, but they need not be quite as fearful as Windows users -- at least not yet.

Malware is an all encompassing term used to describe trojan horse program (which try to fool you into taking some action), spyware (which looks to steal your information or take over your computer) and viruses.

Macintosh computers have not been a large target for malware creators, mainly due to the fact that they have been only a small percentage of the computer market. They are not, nor ever have been, immune from malware, though. Back in my days as an IT staffer back in the early 90's we were plagued with, thankfully benign, yet troublesome Mac viruses such as nVir and wDEF.

That said, Mac user have had a decades long reprieve from malware attacks, compared to the horrible state of Windows malware. Even today, I do not yet feel the need to run an anti-malware program on my Macs, but that time could be coming to an end. As I advise all of my clients, you need to be aware of and on the lookout for, malware that might start to attack the Mac platform.

As of today there are few pieces of Mac malware that can infect you on their own. Mac Defender is a trojan horse program that requires you to take the action of installing it. While there are security holes found every day, many of them are patched quite rapidly. That said, no amount of patches or even an anti-malware program can protect us against ourselves. If you decide to install a program that is a Trojan Horse, you are giving that program full rights to your computer. This is why it is so important to not install software on a whim. Make sure you know what you are installing BEFORE you press the button. Dealing with the aftereffects of an infection is always much, much worse.

So, as I have advised for years, practice "safe computing". Be aware of the threats out there, but don't panic. I'll make a point of posting here in TechnologyIQ when new threats appear so you can be as informed as possible.