iPhone: Epiphany audio recorder can record the past

Imagine an audio recorder that could go back into the past 1, 2 or 5 minutes and capture that great idea, bon mot or brainstorm. Almost like a time machine, you could easily save thought and information that might otherwise be lost. The fact is, this audio recorder exists today and it is called Epiphany.

Epiphany is an iPhone and iPod Touch app that records in a loop over an amount of time that you choose. This loop can be as little as 15 secs or as long as 5 minutes. As new audio comes in, old audio is discarded. That's OK, though, because you aren't trying to capture an entire conversation, but only the most useful parts of that conversation. You do this by tapping the "Remember That" button in the middle of the app screen. When you do that, Epiphany saves the last loop of audio (again, 15 secs to 5 mins) and then also continues recording. Once you feel the moment has passed, you can hit "Finish Clip" to put Epiphany back in loop recording mode, waiting for the next useful piece of information.

Here is how I use Epiphany.

Whenever I am talking with someone about a project, work or idea, I place my iPhone in the center of the table and start Epiphany. When there is an idea I want to capture, I tap the Remember That button as described above. Once the conversation is over, I have a collection of short audio clips that, hopefully, contain the most useful information from the conversation. Now, instead of sorting through an hour or more of audio to find the best parts, I have already "curated" the most important information as it happened. I can keep this audio clips, transfer then to my computer using the built-in WiFi sync or simply take notes about what was said.

Epiphany sounds a bit odd to people when you describe it, but when you show it in action, people immediately see how it can be a valuable tool in information gathering and idea creation.

Epiphany is available in the Apple App Store for $2.99 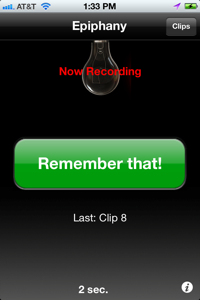 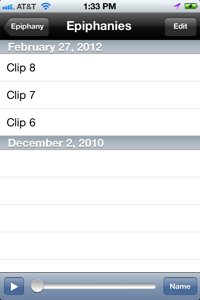 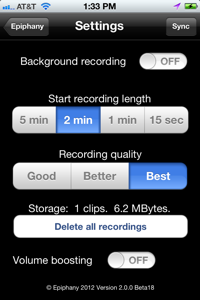 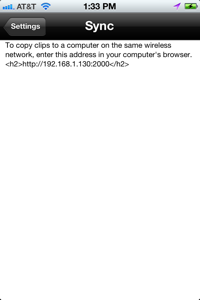