Don't rely on mainstream media for your technology news

By Douglas March 27, 2012
It may sound a harsh judgement, but I have come to believe that no one should rely on mainstream media sources for their technology news. For the most part, mainstream media is trying to report on stories they simply don't understand. They are looking for sensational exposes and stories that make good headlines, but -- much in the same way they report on science stories -- mainstream media focuses on creating fear surrounding our technology and reporting those stories at a knowledge level that can best be described as elementary.

One of the largest problems that mainstream media faces is making technology understandable to the "average" person, whoever that might actually be. Often reporters, editors and producers don't really understand the story. They are simply parroting what they heard from one of their sources. Of course, as in the recent case of Mike Daisey's claims about the Apple-hired Foxconn manufacturer in China, these sources often have an agenda of their own and can manipulate their stories for greatest effect.

When a trusted source of news like NPR's This American Life is fooled by someone like Daisey, it pulls back the curtain on the mainstream media's "Wizard." Showing them to be nothing but repeaters of rumor, not creators of news. Once again, it shows how little mainstream media understands technology. 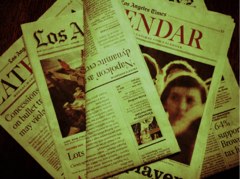 Mainstream media is also limited in the time and space they have available to report a story. These two factors lead to simplistic explanations of highly complicated issues and stories that can be outright wrong. The further pressure of deadlines and the old-fashioned concept of "breaking news" means that stories are often incomplete -- reporting rumor as fact. The problem being, of course, that official correction are few and far between and even then usually buried in the back pages of the publication or at the end of the newscast where very few people notice them.

Such bad reporting often leads to the technological equivalent of the urban legend. Microsoft Vista was unusable. Apple's new iPad will burn your fingers. Every iPhone app is stealing your private information. People are tracking your every movement via your cell phone -- and using it to rob your house. Apple is torturing its Foxconn employees in virtual slavery. Good, well-researched stories take time to develop. You need multiple sources and sources that truly understand the issue and can explain it to anyone, no matter how technical it might be.

But I wouldn't expect stories like that any time soon. In the technology equivalent of "If it bleeds, it leads", sensational stories and stories that build fear will always be the main fodder for mainstream media. They are simply unequipped to report on technology stories beyond the most basic of terms.

This is why online news sources, while exhibiting some of the same faults as mainstream, have an advantage. The best technology news sources have learned from their technology underpinning how to "iterate" their news stories very quickly. Stories can absorb new information and opinions quickly. The public can chime in on the story to request more information and to help explain the issues from their standpoint. With more "eyes and ears" on the story, they are able to develop it more quickly and, hopefully, more accurately and intelligently than the mainstream media. Sure, not every online new source gets their reporting right. They can fall victim to the same problems as mainstream media, but it is hoped that the new methods of developing stories can lead to better coverage of technology stories overall.

So the next time a friend or relative calls or emails with a suspect technology news story, please remind them that mainstream media might not be the best source for reporting on technology stories, especially if those stories involve new and/or complicated technology or issues. Direct them to your favorite news sites where they can find a, hopefully more accurate assessment of the issue.