The venerable tech and geek discussion site, Slashdot (also seen as /.) has announced it is launching its own video channel, featuring stories and interviews on all things geek. There is a wide variety of videos already available including, "Gamestar Mechanics Teaches Kids to Make Video Games", "The Tesla Model S at the Detroit International Auto Show", and the video linked below, "Timothy Gets a MakerBot Replicator Demo at CES."

I know I will be keeping an eye on this page in the future. One complaint, though. It appears that the site doesn't have an RSS feed. This makes it much more difficult to see when new videos have been added. RSS isn't dead yet, despite what some people say and I still use it for most of my online reading. The video embed codes don't appear to be working yet, either, so I included a link to the video, instead of embedding it here directly. 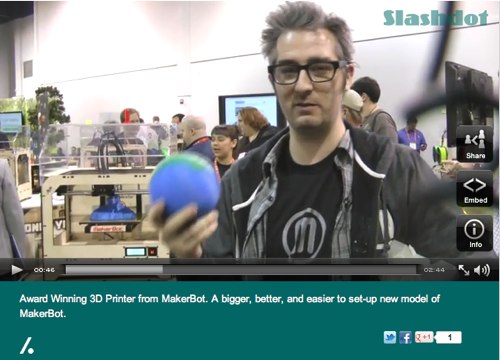