Google Keep is just an upgrade for Google Tasks, no Evernote killer or even resemblance

Google finally unveiled its Google Keep service for real today, after an early reveal misstep last week, and it seems like everyone who was spreading rumors was really, really, wrong. So wrong, you have to wonder what they were thinking. Keep had been labelled an Evernote killer/replacement/competitor, but it seems obvious that many had no idea what they were talking about.

For me, after a few minutes of playing around, it looks to be a minor update to the original Google Task To-Do Manager rather than the Evernote Killer some had proclaimed. Of course, this has always been a problem in the tech world. People take it upon themselves to over-hype something that is really fairly minor. 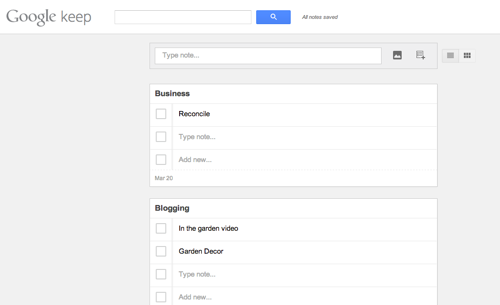 In fact, I would go as far as to say that Keep has NOTHING to do with Evernote at all. There is no way to grab and archive web pages, tag notes or any of the many other services Evernote provides. Overall, I am not quite sure what all the hype was about. I think Google has been the victim of others trying to guess what a product was without having any idea whatsoever and blowing it WAY out of proportion.

Sure, Google might add on to this service, or link it up to other services, in the future, but right now it is really just another ToDo list manager like so many others. The Android mobile app looks to be a bit useful, but nothing that many other apps aren't doing already.

Perhaps I have missed something special, but from y initial look, there is nothing here worth hyping at all.