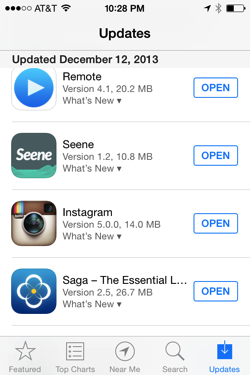 I was wondering why I was seeing so many app updates on my iPhone and iPad thee last few days when I remembered the reason. In fact, the same thing occurred last year around the same time. Each year, Apple Connect - -the system that developers use to release new app and updates - will go on vacation from December 21, 2013 through December 27, 2013. This means that if developers want to get in one more release before the holiday, they need to do it now.

"During that time, iTunes Connect will not be accessible and you will not be able to submit any apps or In-App Purchases. Processing of any Newsstand Atom feeds will be delayed until after December 27. Sales and Trends reports via the Autoingestion tool will be available but may also be delayed.

Also, you should not schedule any pricing changes or apps to go live between those dates. Pricing changes scheduled to take effect in that date range will cause the app to become unavailable for purchase until after December 27. Similarly, apps scheduled to go live during that range will not be released until after December 27."

Of course, until December 21, your App Store icon is likely to have an almost permanent red circle. I am seeing as many as 6 or 7 updates each day and expect it to peak sometime before the deadline. Then App Updates will got quiet until just before New Year's.