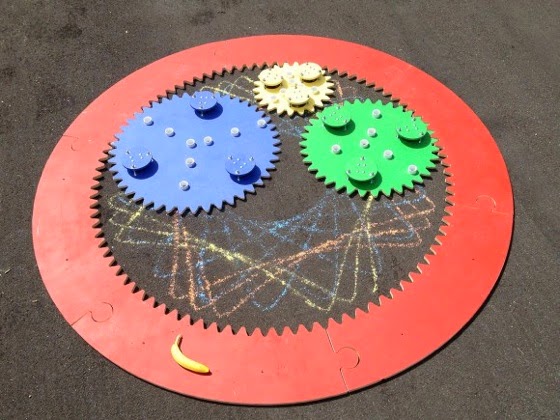 Late last year at a craft show, [hahabird] and a friend came across a laser-cut Spirograph and they both had a go at it. After mocking his friend’s lack of fine motor skills, [hahabird] was struck with the idea of making a giant-scale Spirograph that would (hopefully) be less frustrating for kids of all ages.

He generated the gears using an InkScape plugin, and then moved the project to Illustrator for adjustments. After nesting the inner gear drawings, he was able to print them out on one 3×3′ piece of paper at the local FedEx-Kinko’s. To make a template for routing he pieces that make up the eight-foot diameter outer ring, [hahabird] first cut it out of MDF and then bolted that to plywood. The outer ring’s size was dictated by the number of sections that fit on a 4×8 piece of plywood.