** Get your own Raspberry Pi and Arduino Boards and Accessories here **

At the risk of getting waaaay to meta with our single board computers and microcontrollers, it is now possible to load the Arduino IDE (Integrated Development Environment) on your Raspberry Pi and use it to program your Arduino boards.

There is now a current version of the Arduino IDE compiled and posted so you don’t have to try and compile it yourself. Just download and type install into a terminal window.

The article points out a great reason and need for this IDE on Raspberry Pi and other single board Linux systems...

" it does make it exceptionally easy for anyone to set up a high school electronics lab. The Raspberry Pi is almost a disposable computing device, and combining it with Arduino makes for a great portable electronics lab."

Looking to expand the usefulness of your Raspberry Pi or set up your own computer lab with inexpensive computers and microcontrollers? The folks at Arduino.cc just made it a lot easier. 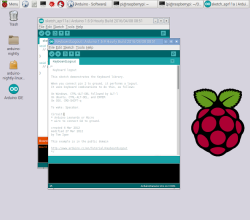