Get your own Arduino Gear via Amazon

This looks like something I might try to adapt to my own monochrome Led Matrix. It was an idea I was already thinking about and I hope I can draw some example from their code to develop my own. I love projects that interact with the real world, whether they are art pieces passively delivering information of some sort. It is a fairly complex project, but that often means there is a lot to learn within. 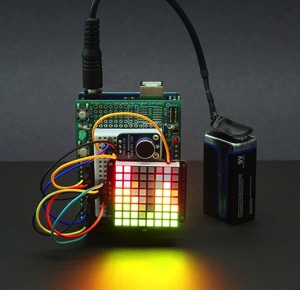 Here’s an easy-to-build project that really packs a lot of blinkenlight for the effort: a little pocket-size music visualizer we call “Piccolo.”

Technically this would be called a “spectrum analyzer,” but as this is not a precision scientific instrument, we’re more comfortable labeling it a “visualizer.” It’s strictly for show.

Check out the entire project on Adafruit