I love when you can combine technology and art and this project highlighted over at Adafruit is a great example. Using a little Arduino tech, important poems and a big dose of creativity, this project turns the ubiquitous WiFi SSID into a poetry delivery platform. If you have your Wifi selection screen open, you’ll see a new line of the poem every few seconds.  What a great repurposing of existing technology in the service of art!

You can see a great demonstration in this video. 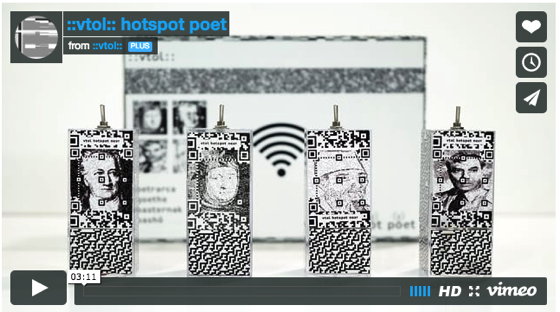 Autonomous micro-device which distributes wi-fi masked as wireless network, visible at any gadget such as a smartphone or a laptop. The device is automatically renaming its network every 10 seconds, taking as its name various lines of poems by famous poets. The device is using an information channel which is accessible and visible to everyone through mobile devices, thus being a non-standard transmitter of poetry. There is no possibility to connect to this network (which is actually a dummy disconnected from Internet) - the message being the name of the network. If one would leave the wi-fi settings menu open, then gradually, line by line, all the poems programmed into the object will be revealed.

There are 4 objects in the set, each of them contains poems of one of the poets: Basho, Goethe, Pasternak and Petrarka. In fact, the apparatus is an ironic device in the spirit of hacktivism, searching for alternative ways of distribution of information in the public spaces. Theoretically, these devices can be programmed to transmit messages with any content, they will be visible in a certain space and will be refreshed even if the whole country is disconnected from Internet. These devices can be also called generators of network/information noise which displaces the real network by a fake one, but with a certain aesthetic aim.

Radius of action of the module is a few dozens meters. The names of networks are shown in a bit different ways on different gadgets: for example, on certain modern android devices, poetic lines are visible only as one network, which is continuously and quickly refreshed; on ios devices there appears a new one, while a few previous ones are still visible, but gradually the new ones replace the old ones; and on mac computers, all names are appearing line after line, and they stay there until the arrow is removed from the network selection menu.