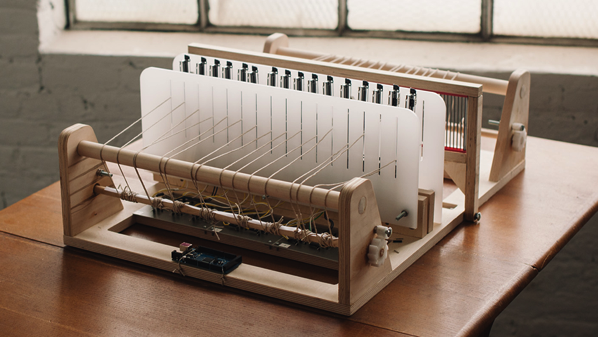 The Doti loom allows users to design freely. Each warp, or vertical thread, is attached to an actuator that lowers or lifts. Because each thread has a separate motor, you can individually address each warp. As the weaver shuttles thread, a pattern emerges additively. The weaver is able to change the state of each thread on the fly, and the complexity of the design is limited only by the number of motors a machine is equipped with. The project began at NYU's Interactive Telecommunication Program as my thesis.Unlike commercially available looms, the user of a Doti loom can weave any pattern, unencumbered by pre-threaded harnesses or the cognitive load of keeping track of a draft pattern.

By networking multiple machines, Doti will provide the foundation for a robust supply chain of independent small batch textile producers. Because the Doti Project is a holistic survey of this open-source model, my research process involves three concurrent threads: the fabrication of a desktop loom, the cultural context for the open source hardware model, and the development of an expressive web application.