A complicated but educational Arduino project with a bit of audio math education thrown in for good measure. — Douglas 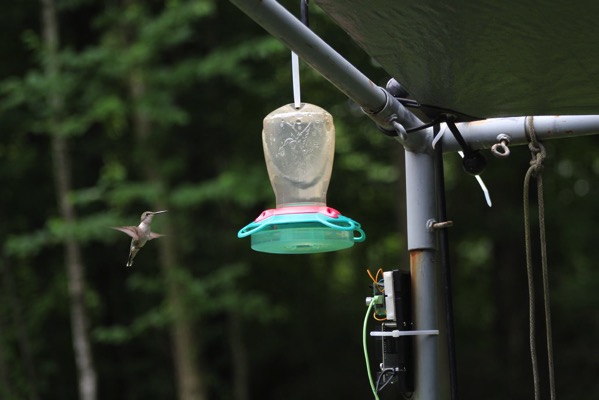 We have a hummingbird feeder on our back deck and for the last couple of years I have been taking pictures of them. Hummingbirds are amazing little creatures, very territorial and their fights can be both hilarious and amazing. But I was getting tired of standing like a statue against the back of my house in order to take pictures of them. I needed a way to capture pictures without having to stand behind the house for long periods of time waiting. I know that I could have used a remote controlled shutter but I wanted pictures to be taken automatically without me having to be there. So I decided to make a device to detect the hummingbirds and take a picture automatically.

I always intended to use a microcontroller to do this. The microcontroller would be able to drive the camera shutter under software control. But the sensor to detect a tiny hummingbird was another thing. I could have used a motion sensor but I wanted to try something unique. I decided to use sound as the trigger.

Learn more about Arduino with these books and components