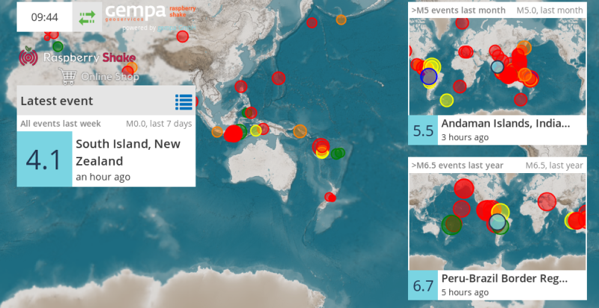 The Raspberry Pi’s goal, at least while it was being designed and built, was to promote computer science education by making it easier to access a working computer. What its low price tag also enabled was a revolution in distributed computing projects (among other things). One of those projects is the Raspberry Shake, a seismograph tool which can record nearby earthquakes.

Of course, the project just uses the Pi as a cost-effective computing solution. It runs custom software, but if you want to set up your own seismograph then you’ll also need some additional hardware. There are different versions of the Raspberry Shake, the simplest using a single Geophone which is a coil and magnet. Vibrations are detected by sensing the electric signal generated by the magnet moving within the coil of wire. Other models increase the count to three Geophones, or add in MEMS accelerometers, you can easily whip one of these up on your own bench.