Some of the best technology projects are those that help make the invisible visible. In this case, it shows you the satellites orbiting  above your head and helps to give you a view into a dimension that is extremely difficult, if not impossible to see otherwise, — Douglas 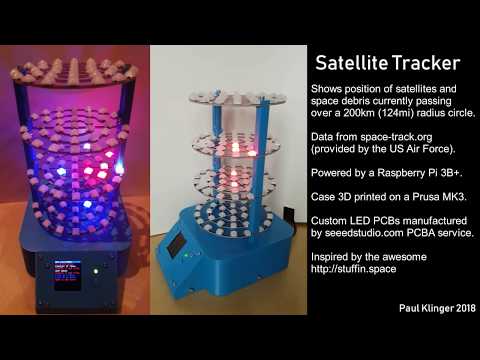 Whilst modern technology relies heavily on satellites, it’s easy to forget they’re there; after all, it’s hard to comprehend mostly-invisible lumps of high-density tech whizzing around above you at ludicrous speeds. Of course, it’s not hard to comprehend if you’ve built a real-time satellite tracker which displays exactly what’s in orbit above your head at any given time. [Paul Klinger]’s creation shows the position of satellites passing through a cylinder of 200 km radius above the tracker.

Each layer of LEDs represents a specific band of altitude, whilst the colour of the LEDs and text on the screen represent the type of object. The LEDs themselves are good old WS2812b modules, soldered to a custom PCB and mounted in a 3D-printed stand. The whole thing is a really clean build and looks great – you can see it in action in the video after the break.


An interesting link found among my daily reading