"On my iPhone…" is a new series from TechnologyIQ, sharing real world examples of how I use my iPhone, interesting apps and more!

You have probably heard about Evernote in a hundred different places, as it is the "golden boy" of mobile apps. I must say, though, that it took me quite a while before I was able to fit it into my workflow. Evernote is extremely flexible and everyone has a slightly different way of using it. The program is basically a shareable, cloud-based, database of "notes" that you can create in a variety of ways -- text, web clip, photo, audio. Once a note is added, it can be accessed on the web, on your desktop PC, and on your mobile devices. This makes for a ubiquitous data capture system that can help you grab every idea you have not matter where you might be. You can separate your notes into notebooks and tag each note with a series of keywords to make them easier to find later.

For me, the task that finally pushed me to use Evernote more was collecting up all the shared items I post in any given month. I like to create a month-end blog post containing links to all those items and Evernote allows me to capture them all -- as I share them -- using its automation features and the web site IFTTT.com (If This Then That). IFTTT.com is like a scripting engine for the web. Whenever I Pin something on Pinterest or Stumble something on StumbleUpon, it is automatically forwarded to an Evernote notebook for later sorting and processing as a blog post.

Since I started using Evernote in this way, I have found that I have also started to use it more to capture ideas for my various blogs and podcasts. While I still carry a paper journal for quick capture of ideas, Evernote is slowly becoming my digital journal of choice. 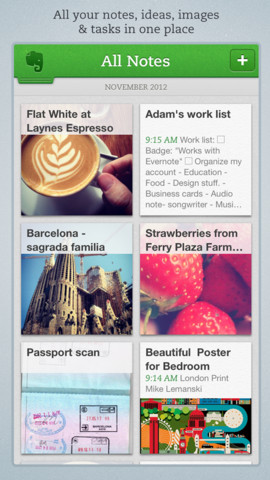 Previously in "On my iPhone…":