I've never been that fond of Twitter's web site or client software either, for that matter. Much of this stems from Twitters inability to understand that many people, myself included, have multiple Twitter accounts that they must monitor and use. The apps developed by Twitter force you to switch between accounts in order to view the stream and this simply doesn't work for me.

Enter Tweetdeck (and several, now-defucnt, clients before it). This software was developed by a standalone company first and then acquired by Twitter so that should prevent it from disappearing too soon. As to the advantages of Tweetdeck? First, I can have one column that contains all the tweets from all my accounts. Then I can ad additional columns for specific purposes, such as monitoring the mentions (@ replies) and direct messages from each account. This consolidation allows me to easily use all of my Twitter accounts from one piece of software without manually switching between those accounts.

From the Tweetdeck Web Site...

"TweetDeck makes it easier for publishers, marketers and power users to track the real-time conversations they care about. It brings more flexibility and insight to power users through a customizable layout that lets you keep up with the people and topics that matter most to you. And, you can join the conversation by tweeting, sharing photos and links to news stories, and more." 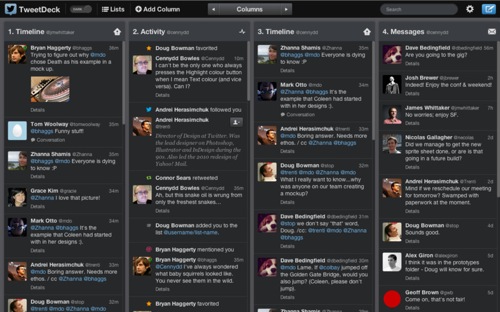 Previously in On My Mac...