Real Racing 3 for iOS | Real Racing 3 for Android
It's the holidays and sometimes you want to use your technology for more than just email, spreadsheets and phone calls. This has lead me to seek ut some apps that bring a bit more fun to my iPhone, our iPad and our Android devices, like my Kindle Fire.
I have been watching YouTube series playthoughs of the Forza and F1 Racing games for consoles and PCs and this got me to thinking about racing games so I did a little searching and found Real Racing 3. I have been enjoying it greatly for the last several days. Real Racing is a free-to-play game. This means you can download and play but it also offers a host of real-world points that can be purchased to speed game play. For example, if you decide to upgrade one of your vehicles, you may need to wait 10-15 minutes before you can play you next race, or pay a few extra credits to continue immediately. I am not one to invest a lot of real money in games, but I have found a lot of game play in the free version, simply waiting out the delays to play the next round.
You play Real Racing 3 by tilting your iPhone or iPad to steer and tapping the screen to accelerate and brake. In early stages, you can engage both auto acceleration and braking to help you get through the races or turn off the assists to gain more experience points and make the game more challenging.
Races take around 5-10 minutes to complete in each round, with different challenges like time trials, regular races, elimination head-to-head races and more. This make it an easily "snackable" game to play when you have a few minutes and want a quick, fun, break.
From the Google Play Store...

Featuring a wide variety of officially licensed tracks, an expanded 22-car grid, and over 50 meticulously detailed cars from makers like Porsche, Lamborghini, Dodge, Bugatti, and Audi. Plus, racing against friends becomes even easier with the advanced Time Shifted Multiplayer™ (TSM) technology, allowing you to race anyone, anytime, anywhere on smartphone and tablet devices!
REAL CARS
Featuring Real Racing’s largest roster of cars yet, don’t miss our new manufacturers like Porsche, Lamborghini, Dodge, Bugatti, and Audi. Take the wheels of over 50 intensely detailed racers and test your skills on an authentic 22-car race grid – for the first time on mobileREAL TRACKSIn another first for the Real Racing series, burn rubber on a full lineup of real tracks in multiple configurations from top locations around the world, including Mazda Raceway Laguna Seca, Circuit de Spa-Francorchamps, Silverstone, Hockenheimring, and many more.
REAL PEOPLE
Like nothing you’ve seen before, our innovative new Time Shifted Multiplayer™ lets you race anyone, anytime – even if they’re offline! Every career event is filled with fully interactive AI-controlled time-shifted versions of your Facebook friends, as well as other players from around the world."
Read more 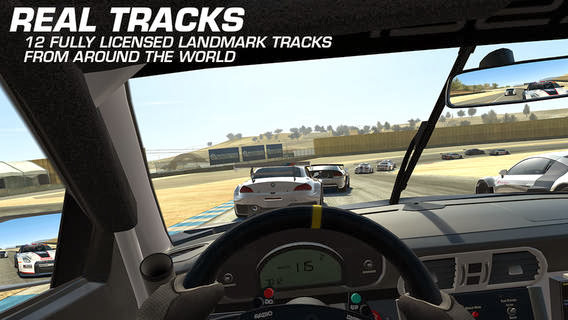 Previously in "On my iPhone/Android…":

"On my iPhone…" is a new series from TechnologyIQ, sharing real world examples of how I use my iPhone, interesting apps and more